Big box supermarkets are not going anywhere, and are, in fact, getting larger in floor area, but most of the growth in the grocery business is in small-format stores. These include liquidators, farmers’ markets, produce markets, natural and health food stores, and discount grocers with limited product selection. 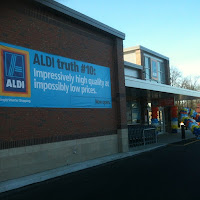 Aldi is opening new stores like this one every month. 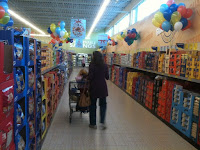 The Aldi store entrance leads into the snack aisle, which takes up one fourth of the total product display area.

It is this last category that is hardest to understand. Is there really a place for the Aldi store that opened near here today? Aldi’s specialty is impressively low prices on a broad selection of snacks, but it requires grocery shoppers to make compromises in almost all other areas of the shopping experience. You won’t find your favorite brands, there are only token selections in canned food (40 cans to choose from) and frozen food (just two freezer chests, pushed together, with a scant selection of frozen entrees), bread and bakery items are truly awful, and most of the other categories you would expect to find in a grocery store are missing entirely. Aldi only grudgingly permits shopping carts, takes payment in cash, and expects you to bring your own bags. Is this what people want in a grocery shopping experience?

Well, perhaps so, based on the turnout at the grand opening this morning, and the fact that it is something other than a big-box supermarket may be the biggest factor in Aldi’s favor. The enormous selection you find in the traditional large supermarket is something of an illusion. Only a small fraction of the products are things you actually want; the rest are placed there at the behest of the food manufacturers, who hope to eventually persuade you to select their products instead. By contrast, at a discount grocer, you don’t find shelf on top of shelf filled with ill-conceived and unpopular products, and there is a fair chance that you will find something resembling what you actually want, and in only five minutes or so.

The trend away from big-box grocery stores may represent the same cultural forces that are taking their toll on big-box stores in other categories. Among them: big box stores rely heavily on sales circulars delivered inside local newspapers, and the under-45 crowd, hardly an insignificant part of the economy, isn’t as easily impressed either by the newspaper format or by the temporary price manipulations that the sales circulars represent. Sales circulars aside, supermarkets tend to have the highest prices you can imagine for most of the products they sell, so it is easy for a shopper to suspect that there must be better deals somewhere else.

Aldi takes pains to confirm those suspicions. Prices are especially good on high-profile items such as potato chips, American cheese, carrots, and Christmas candy. If you look for low prices, you can find them. But if you are trying to put together food you could live on for the week, Aldi is an exercise in frustration, and it may not be much cheaper than the supermarket across the street. I saved about $5 on a grocery bag of snacks and produce — not necessarily worth the trip if you have to go on to another store for the rest of your food. Other discount grocers specialize in different product areas, but the shopping experience is not very different. My feeling is that it is just a matter of time before shoppers recognize that discount grocers are ultimately offering another version of the same illusions that bothered them in the supermarkets.