Analysts today are comparing Kraft Heinz to Anheuser-Busch InBev. In both cases, conglomerates of high-chemical consumer brands are trying to compete by cost-cutting.

I don’t drink beer so I can’t vouch for the aptness of the comparison. I have seen my beer-drinking friends switch almost entirely from factory-made beer to local craft beer over the last twenty years, and it is a transition that has happened without much discussion. From the outside, it looks as though factory beer got so icky that drinkers went looking for any available alternative.

The story with Kraft Heinz’s packaged food brands in categories such as sausage, pickles, ketchup, and cheese sauce is similar. The general strategy of the conglomerate is to homogenize a product as much as possible, add as many low-cost chemicals as they can get away with, and present it in a package that can be kept on the shelf for years. It is not the way most consumers these days would ask you to manufacture a packaged food.

The Kraft Heinz brand that is losing ground the fastest is Oscar Mayer, and I can easily imagine why. I remember in my childhood getting the chance to try out this brand, and no one could explain to me how it could be a food that people would select voluntarily. Kraft and Heinz, though, were two of my go-to brands for many years, and then I raised my sights at the same time that the factories were lowering the quality of their recipes. Heinz has fallen to about sixth place on my list of preferred ketchup brands, but I see Kraft as a brand of last resort, a product I probably haven’t purchased in ten years, though I would still eat it if I had nothing else to choose from. In both categories, ketchup and macaroni and cheese, my own personal consumption fell by more than half perhaps five years ago as I opted for more fresh and nutrient-dense foods. Even if the Kraft Heinz brands could somehow hold their market positions, they are selling into a declining space.

Other food shoppers are making this same journey now, it seems, looking for better food choices and trying new brands. Kraft Heinz is trying to adapt, but slowly, without doing anything sudden. It must now contend with several newer brands that have more credibility in niches like ketchup and macaroni and cheese. It is trying to catch up, yet is unwilling to change as quickly as its competitors can.

The news from Kraft Heinz today is complicated, to say the least. There are multiple accounting controversies and investigations, all seemingly unrelated to each other and to the company’s core problems. An eye-catching $15 billion write-down that surely looks scandalous to the casual observer and must have been the main thing prompting a 27 percent decline in the stock today doesn’t seem to connect to the larger trend, in which more supermarket shoppers are trying to stay away from the traditional high-chemical approach that has dominated packaged food since the 1980s.

In a way, Kraft Heinz is another HP-Compaq story — major brands combining just so they can decline together. In a few more years, Kraft Heinz’s total sales could be about the same as either of its two predecessors, only to go down from there, the same thing that happened to HP and Compaq. 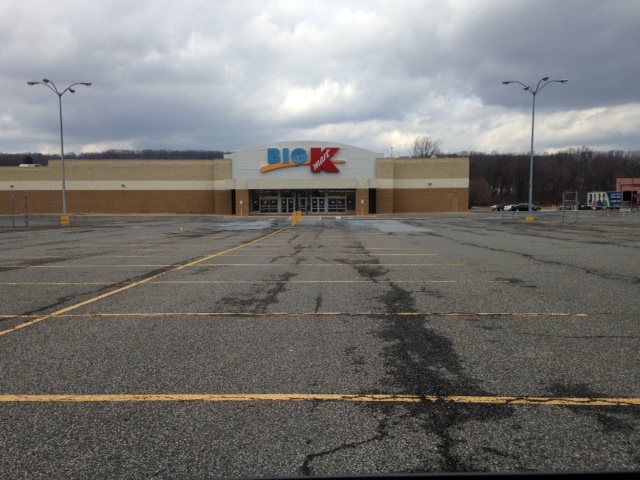 Kmart still exists, but most of the stores have closed. Here is a photo of the last Kmart store in my local area, now closed, but with the lights still on. Millions of dollars in unsold inventory has to be shipped out to other stores.

New York City community leaders worried about the likely impact of a major Amazon office center there are breathing a sigh of relief after Amazon announced it has canceled its plans.

Last week there were reports that Amazon was trying to negotiate further concessions on top of the $3 billion in subsidies that state and city officials had already agreed to. Today, though, Amazon released an alarmingly bitter statement blaming the cancellation on opposition from city officials. In its statement, Amazon falsely claimed its project had the support of 70 percent of city residents. In fact, the plan faced an immediate backlash from the public after the scale of the promised subsidies was revealed, with further concerns when it was learned that the new facility would probably not create any net job growth. The prospects for the project were dimmed further when Amazon made additional demands in closed-door meetings with officials.

Amazon’s change of heart was surely more influenced by a disappointing December across the retail sector than by local opposition. With future revenue in doubt, Amazon is scaling back its plans. The surest indication of this is that Amazon says it has no plans to replace the proposed New York City facility with similar one elsewhere. Even without the New York City facility, Amazon probably will never see the kind of growth that would justify its rapid office expansion, and it could go into a decline at any point without warning. That becomes much more likely if there is an recession in the United States, a prospect that seems closer today after the government released data that shows a decline at retail in December.

The timing of Amazon’s decline is hard to predict, but a decline at some point is inevitable, and New York City will be spared the impact of that decline, now that an Amazon office complex will not be going forward there.

The Hasbro earnings report confirms the effect of the overhang of inventory from the Toys ‘R’ Us liquidation during the holiday shopping season. Sarah Whitten covering the story at CNBC:

I feel confident that the toy inventory overhang is still in stores and warehouses now after muted toy sales across the retail sector in 2018. It may take the 2019 holiday shopping season to get toy inventories back to a steady-state level.

One More Year for a Smaller Sears

Sears will exit bankruptcy, but in a state at least as precarious a year ago.

A bankruptcy court today approved the sale of Sears to its CEO’s hedge fund in the hope that this arrangement would temporarily save the jobs of the retailer’s employees. The new Sears and Kmart will have 425 stores, though observers expect store closures to continue at a rate of roughly 4 per month. The same as a year ago, the company faces a cash crunch and a load of liabilities that it cannot reasonably expect to ever pay. It is a company operating at a loss. The losses between now and the end of 2019 are likely to be in the neighborhood of $1 billion, a sum that would use up cash on hand and available credit. Even though it is exiting bankruptcy, it still looks like Sears and Kmart are probably heading for liquidation within a year when cash runs out.

The new Sears and Kmart will face new challenges that result from the current bankruptcy. Employees now know for sure that their pensions will not be funded. They have little incentive to stay with a doomed company if they can find an equivalent job anywhere else. As always, it is the most skilled employees who will leave most easily. Suppliers that were not paid when Sears went into bankruptcy will be in no position to extend credit to a company that remains desperately short of cash, so Sears and Kmart stores will have even less to sell in 2019 than they had in 2018. Shoppers will have little reason to return to the stores knowing that the company is on its last legs and the merchandise they are looking for in the store is not likely to be found. The world continues to turn away from department stores in general. It is a retail category that has been in decline since the late 1980s even as retail in general has boomed. Sears and Kmart have done worse than the category they are in, and now they need to do better than average just to survive.

Just to make it through 2019, Sears needs big changes. The company knows its stores are too large, and it will continue to shrink some stores in place and move others to smaller locations. At the same time, it desperately needs new investors to keep operating and pay for the costs of these changes. That will be hard to arrange; investors usually like to bet on a growing company rather than one that must shrink to survive.

Sears needs a business plan that will allow it to make a profit. It needs to reclaim its identity and present a reason for shoppers to go into the stores. As a first step, Sears and Kmart need to cut back on their clothing offerings. Sears could even abandon clothing entirely. Sears was never a fashion name, and for Kmart, that is a history from so long ago that most shoppers have forgotten.

To accomplish any of this, Sears and Kmart need new management. A management team that could not manage a single change to the business plan in five months of bankruptcy can hardly be expected to turn the two retail chains’ business models upside down in the ten months that remain before cash runs out.

Let’s assume for the sake of discussion that both retail chains go into bankruptcy again in 8 to 13 months, as analysts expect. The current bankruptcy can be seen as a restructuring of liabilities mainly for the purposes of the second bankruptcy. The biggest losers this time around are employees, suppliers, lenders, landlords, and stockholders. A year from now, it may be the same story again.