Yes, the Sears store in Exton is closing. I went to the store and took a picture. 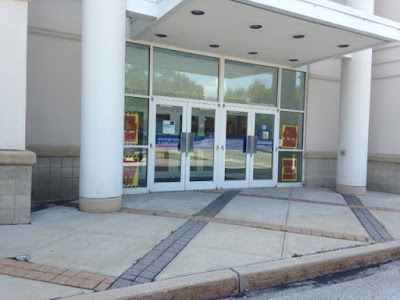 The posters in the windows read “Store closing sale! Nothing held back!” At half a meter square, these are a far cry from the signs and banners you expect, but the wording could not be more clear. If the message is muted from the parking lot, it is more obvious after you step inside the store. The sale message is repeated on larger laser-printed paper banners hanging overhead.

But if you don’t go into the store, you might never know that the store is closing.

The store finder on the Sears web site does not mention that the store is closing. I have not seen a closing date. As I understand it, legally the date would have to be within six months, but that doesn’t narrow it down much. I don’t think there have been any print advertisements or news stories about this store. The Internet banner ads appear to be narrowly targeted — no one else seems to have seen them.

When I saw the ads myself I initially thought they were either fake or a mistakenly approved ad campaign. This is the era of Internet misinformation, after all, and it would cost a rogue actor only a few dollars to run display ads that reach only bloggers who have mentioned Sears and its recent bankruptcy, in order to plant a false idea and create a rumor. An online ad campaign might be prepared for the future and then launched by mistake with hardly anyone knowing about it even within the company. It seemed strange that there I could not find mentions of the store closing on the Sears web site, in a news outlet, or anywhere. There were news stories about other locations closing, but not the one in Exton. I went to the store and verified that the store closing sale is real.

So some Sears stores are having a “secret” store closing sale. That is a concept I have never run across before. Traditionally the whole point of a sale is to draw attention and bring shoppers into the store. Sears is taking the opposite approach. It is closing stores and and hoping the world does not notice.

Sears is surely planning on having millions of dollars in unsold merchandise, as I saw in the nearest Kmart store when it closed a year ago. The merchandise can be shipped out to another store in an adjoining county. There isn’t the same pressure to sell everything when a retail chain is closing only a dozen or so isolated stores.

The real story here, though, I believe, is embarrassment. The recent Sears bankruptcy was supposed to cut losses and put the retailer back on an even keel. Instead it is already back into its downward spiral. For context, the Exton store, though surely too large for the Sears of today, is one of the chain’s best stores and its only remaining store in one of the fastest-growing counties in the country. If it can’t keep going here then there is not much hope for Sears stores anywhere. But Sears needs to give a good appearance for investors and lenders if it is to keep operating even one more year.

Perhaps Sears has reached the point where giving the impression of holding its own is more important than actually making a profit. That would explain why it could decide that getting shoppers to buy the merchandise in the stores that are closing is not so important as its public image, so that a store closing is something the retailer would rather not talk about.