What Happened to Black Friday?

I made a point of going out shopping today, and my reaction, in a few words, is: What happened to Black Friday?

For years I have attempted to assess the mood and energy level of holiday shoppers. I have not written so much about it this year now that I have reduced my own shopping and and am not out in the stores so often. My general impression so far this season, though, is strikingly different from recent years. Shoppers are more mellow than I remember seeing. They aren’t in a big hurry, don’t feel that they need to buy anything, and aren’t expressing much financial pressure.

This kind of shopper is good news and bad news for retailers, isn’t it? These are shoppers who can take their time to look at merchandise and who are able to buy. On the other hand, they have to be persuaded to buy, and it is hard to guess how that can be done. They will be perfectly happy to walk away empty-handed.

Today is Black Friday, and I went out to the stores at 10 a.m. and a second time at 3 p.m. I made purchases at three stores, visited several more, and drove past more than 100. Things just weren’t very busy anywhere. Busy, yes, but no more so than any Saturday in October when I saw people doing their Christmas shopping early so they could avoid Black Friday. Some parking lots were half full, but most, much less than that. No one had to look for a parking space at any store I saw. Most stores had only one or two cash registers open. If the level of traffic I saw today is any indication of the shopping season, retailers in general and Sears in particular are in some trouble. 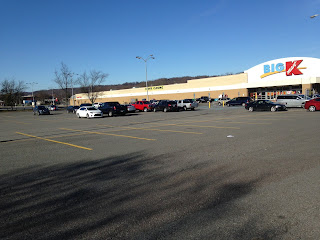 My largest purchase was at the Thorndale location of Sears subsidiary Kmart, which is halfway through its store closing sale. I was chagrined at how few people were there when I arrived at 10 a.m. and took this photo of the parking lot. Remember, this is the most-hyped shopping day of the year, and it is the middle of the biggest and last sale in the history of this particular store. Almost no one was there. There were two cash registers and very short lines.

I had heard stories about bare shelves at Kmart stores, and my visit bore that out, but not in a good way. About 10 percent of the displays were empty or nearly so. I bought the last rope and nearly the last drill bits in the store. The grocery aisle did not have much left. Yet most of the store was excessively stocked, as if the company was planning on two or three times a normal level of seasonal shopping traffic. Even with store-closing discounts, most of this merchandise cannot possibly be sold if the store is to close days after Christmas as planned.

There were hundreds of racks holding fall and winter clothing. That must be millions of dollars of clothing in the store, and I did not see even one shopper looking at the clothing. Holding so much inventory that will have to be sold to liquidators a month from now is a disaster for a company that, in case you haven’t heard, is already in bankruptcy. Sears Holdings needs every Sears and Kmart store to have an above-average holiday season to have a chance of keeping stores open, and in the Kmart I visited there was no sign of that.

Though the near-empty Kmart parking lot would shock more than a few observers, traffic was not much better in the adjacent shopping center. The area was affected by an freak cold snap with high temperatures barely above freezing today. Retailers will tell you they like cold weather and snow piles because it reminds shoppers to buy winter clothing, but the effect is lost if everyone stays home.

Traffic had picked up slightly by the time I went out again, arriving at my first stops around 3 p.m. Traffic at many stores was no more than a regular business day, but some stores were especially busy. The two stores that had heavier traffic than I would expect to see on a Black Friday were department store Boskov’s and pet-supply store Petsmart. Each, I suppose, is family-friendly in a different way. I want to be careful not to understate the importance of a shopping day on which the schools are closed and families can go shopping together. These two stores aside, from what I saw, Black Friday was more hype than substance.

Some stores I visited had no Black Friday specials at all, despite having made a practice of it in previous years. The store that put the biggest Black Friday circular in my mailbox on Wednesday was Walmart, but its parking lot was only about one fourth full when I went by around 4:15 p.m.

I made special note of Barnes & Noble, one of the largest retail chains on bankruptcy watch this season. It had shoppers when I drove by, but there were plenty of empty parking spaces too. It was no more traffic than you would expect to see on a regular weekday evening, but surely today’s shoppers were buying more.

Has Black Friday disappeared from the calendar? I wouldn’t want to hurry to reach that conclusion based on my own observations. From what people are telling me, the real action was during the night. The hard-core shoppers were out as early as 7 p.m. the night before (yes, that’s Thanksgiving Day) to shop late into the night, or all night for some of them. At the major retail chains that had the most aggressive promotions, I am told, parking lots were more crowded between 11 p.m. and 3 a.m. than they were between sunrise and sunset. Some stores had parking lots more than half full in the wee hours of Black Friday, only to see them empty out before daybreak.

Even if overnight revenue was good, this is a sad and perverse situation. Six hours of heavy breathing in the middle of the night does not necessarily make up for a lost day at retail. What does it say about the state of retail that, with a set of bizarre and unpredictable incentives, they can get shoppers into the stores at all hours of the night, but they still can’t bring anyone in to buy during the day?

So was this lackluster Black Friday the high point of the shopping season, or will shoppers who stayed home today turn out to do shopping on another day when the weather is more favorable? I don’t believe history can be a guide. It is safe to say we have never seen a Black Friday like this.