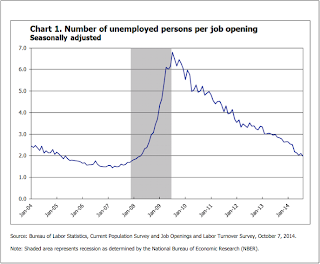 If you are a job seeker who has recognized job skills, perhaps the most relevant job market statistic is the one that tells you how many job openings there are in front of you. For the United States as a whole, that is best measured by the ratio of unemployed workers to job openings. Most workers will care more about local market conditions than the total for the country, but the national measures should fall near the middle of the local measures. For the first time since the beginning of 2008, the ratio of workers to openings fell below 2 in August, a good sign for job seekers.

The theoretically ideal number is 1, but 2 is pretty good — at least when compared to 5 or 6, the range we saw in 2010 and 2009. With a ratio of 5, an average job seeker may have to apply to thousands of job openings (for which he or she is fully qualified) to be reasonably assured of being offered at least one job. With a ratio of 2, a few tens of applications is likely to suffice, so that well-qualified job seekers are less likely to remain unemployed for years at a time.

Of course, these are averages, and there are still many well-qualified unemployed workers who have been passed over for more than a year. Meanwhile, the job market remains terrible for new graduates and for those whose skills do not quite match the skills that are in demand. Employers will have little interest in taking chances on this second tier of workers until the pool of fully qualified and experienced workers dries up. The unemployment rate, around 6 percent, is enough to say that that degree of job market recovery is still more than a year away.