That’s because I just completed a loyalty program that you almost had to be a millionaire to qualify for.

The setup sounded simple enough when the offer arrived. All it would take to qualify is $1,000 per month in credit card purchase transactions for five consecutive months. “I could do that!” you might say — but look more closely.

First of all, your biggest expenditures aren’t things you can pay for with a credit card. In many households, the two biggest payments every month are payments on a home loan and an auto loan. Maybe there are student loan payments too. Probably you can’t pay any of this with a credit card — but even if you could, as loan payments, they wouldn’t be considered purchases, so they wouldn’t qualify for this offer. Consider other major household categories. Taxes, insurance, rent, utilities — if you can pay these items with a credit card, the transaction comes with a surcharge added. The surcharge is just large enough to wipe away any advantage you could possibly get from a loyalty program. There are other forms of spending, including some like medical care that are not entirely predictable, that don’t fit the premise of paying with a credit card.

There is one other big catch with this loyalty program that may be a little less obvious. When you spend using a credit card, you don’t control the timing. Transactions clear in a pattern that as far as you are concerned is random. Many transactions post to your card the same day you make a purchase. Others, especially fuel purchases, take several days to clear. Charges for online purchases can be delayed for weeks if just one item is out of stock. To make up for this sloppy transactional timing, to be somewhat confident of reaching a specific threshold within each calendar month, month after month, you have to plan on spending about 30 percent extra. Remember that an incentive program isn’t a reward but an expense if you have to make extra purchases to meet the terms. To make sense as a reward to pursue, it has to come from the purchases you already have planned.

Of course, I hope you are not spending all the money you have coming in, but saving some of it for the future. Put all these household budget effects together, and the $1,000-a-month loyalty program only makes sense if you have gross household income of at least $7,000 a month. But if your income is at that level, you are earning $1 million every 12 years or less and are, at least, well on your way to becoming a millionaire if you so choose. If your income is less than $7,000 a month, it’s highly likely that you’ll fall short of $1,000 in total credit card spending in at least one of the five months.

If this loyalty program sounds so much easier than it is, that could be by design. The promotion would be terribly expensive for the bank if it had to pay out a reward for everyone who signed up. With a success rate below 20 percent, the cost of the actual rewards isn’t so high. In addition, the bank can be relatively confident that the customers who receive the reward money in the end are millionaires or people with a similar level of prosperity — and for a marketing organization, that is valuable information worth paying for.

The main purpose of the promotion, I guess, was to get prosperous shoppers to pay with Discover Card, so that merchants might be persuaded that Discover Card users are potential big-ticket shoppers, like American Express cardholders. A secondary and darker reason, I expect, was to squeeze more transactions out of middle-income shoppers who did not realize they would not qualify in the end, or perhaps even to induce them to overspend so that they would be paying interest for several months. The bank was aware of this latter possibility and was careful to caution program participants not to spend more than they would anyway.

For the record, I am not a millionaire. I mentioned a specific income level a moment ago, but there are also special cases where shoppers might spend a higher proportion of income on credit cards than you would expect. In my case, I knew I would be traveling on business during most of the months of the promotion. All of my travel could be paid with a credit card, and that more than covered my spending requirement for three of the months. In another month, an emergency home repair covered my spending requirement in a single transaction. That left just one month where I might fall short. In the end I made stock-up purchases of food and household items, spending several hundred dollars this way. For example, I bought enough paper towels, laundry detergent, and macaroni for the rest of the year. Doing this in just one month made my participation in the promotion financially dubious. I had a list of other purchases that I might have accelerated — roofing materials, gardening tools, and the like — but fortunately, it did not come to that. 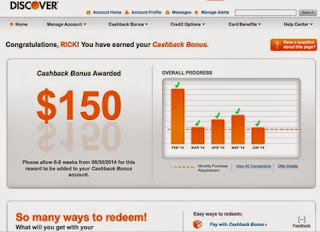 I got my reward, but it wasn’t as easy as you might think.

To make a long story short, even this seemingly normal level of spending was something of a stretch for me as a non-millionaire. And my reward for spending like a millionaire for five months? A special cashback bonus of $150. Really? $150? Is that a large enough incentive for a program that’s designed to change the habits of millionaires? Apparently it is, and it is another example of the way the rich get richer. After you discount for the extra spending I did to qualify, I am not certain I got much of the benefit of the reward. The people who did well with this promotion are the real millionaires — and, of course, the bank.