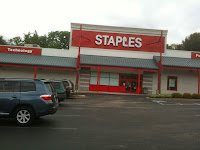 There isn’t much to tell you that the Staples store in Frazer, Pennsylvania, is about to close — no hyped-up going-out-of-business sale, no storewide markdowns, no banner hanging from the front of the store. There is an apologetic poster in the store’s front window giving the closing date, and a few clearance displays can be found in the main aisles, but these are details a shopper could easily miss. Three weeks before the closing date, it is business as usual, with shelves almost fully stocked. 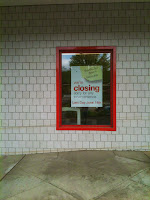 i wasn’t about to go away empty-handed from a store that was about to close, so I looked over the clearance displays. The best prices I found were on black fine-line Sharpies and paper towels. The receipt I got when I purchased these items was the strongest indication that something was up — it was two feet long. The receipt repeated the message and apology about the store closing. Then it had coupons encouraging me to buy online or at any other local Staples location. The coupons are pointedly not valid at the Frazer store itself — Staples wants its customers to seek out the other nearby locations, or to try ordering on their web site.

It is easy to imagine the Frazer store closing. There are four other stores within ten miles, each bigger and more successful than the one in Frazer. Staples is closing stores simply because it has too many of them. There is no master list of locations to close, but Frazer is one of the first. After the store closes, I can imagine the stock being taken from the shelves, loaded on a truck, and taken to the nearest remaining Staples store, restocking the shelves there. I can also imagine regular customers going for months without noticing that the store had closed. Office supplies don’t have the urgency that they had twenty years ago, at least not until the printer is out of toner, and that doesn’t happen nearly as quickly as it once did.