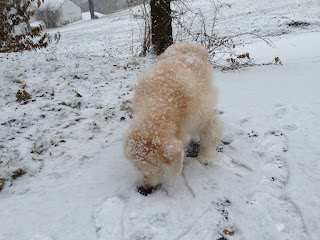 Christmas arrived late. Fluffy snow arrived and coated the ground and the picture here was taken only after people had returned to work today. Meanwhile, packages projected to arrive before Christmas were shipped in such huge numbers on Sunday and Monday that not all will be delivered even today.

I know something about the latter. A package that an online store thought would arrive here between December 20 and December 24 did not roll into town until 9:04 a.m. on December 24, three hours too late to be sorted and put on a Christmas Eve delivery truck. Even if it had arrived at 6 a.m., the trucks were already filled with the flurry of two-day shipments. Now the unexpected snow can only slow down the remaining deliveries. Of course, delays are worse to the north where the ground has been ice-covered since the weekend.

We have more than enough excuses for the delays. Package volume, like light snow, is hard to forecast accurately even hours in advance. Bad weather in the first half of December pushed more shoppers than ever online late at night on December 22, after they realized that the last weekend was over and the shopping hadn’t been done. UPS did the right thing in sending most of its workers home before Santa arrived.

You can’t properly blame the retailer or delivery company when you ask them to send you a package with no time to spare, knowing that not all packages arrive on time. Fundamentally, this pattern of rushing, cutting things close, and arriving late is a sign of being overcommitted, or attempting more than time will allow. People were being unrealistic and unreasonable in their planning. We can decry the wishful thinking or celebrate the ambition that it represents, but the key to making it work is flexibility, to receive the things that seem to arrive out of sync. It is an enjoyable snowy scene this morning even if it seems to have arrived on the wrong day.