Obesity, Inactivity, and Diabetes by County

New county-level data released by the Centers for Disease Control and Prevention (CDC) sheds new light on obesity in the United States. To begin with, the old notion that obesity is mainly a problem of southern cities can be laid to rest. You can see on the county-level map that a pattern of obesity in a state often bypasses major metropolitan areas. 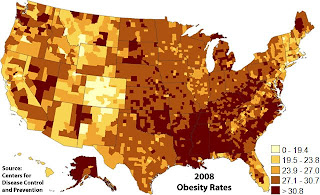 You can also see that counties with the highest levels of obesity can be found far to the north, particularly in the foothills west of the Appalachian Mountains.

Anyone who imagines that obesity is mainly about food should compare the first map, which shows obesity rates, with the second, which shows rates of physical inactivity. In each map, the higher rates are shown in darker colors.

There is a broad similarity between the two maps; it is the same areas that have high incidences of physical inactivity and obesity. The strong association between obesity and physical inactivity offers hope to anyone trying to lose weight by becoming physically active. Food is an important aspect of obesity, but when you compare the two maps, you can see that it’s not just about the food. 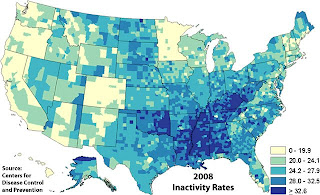 Obesity has dire consequences for health, and those consequences may include diabetes. The third map shows the prevalence of diabetes by county. This is actually the main thing the CDC is studying with the county-level data, because of the enormous financial and human costs of diabetes. You can see, again, a strong similarity among the maps. The rates of diabetes are much lower than those of obesity, yet the diabetes map and the obesity map line up with surprising precision in most areas. 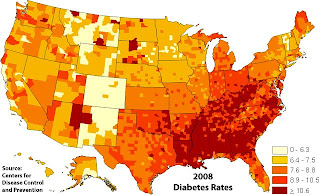 This does not mean that obesity is the cause of diabetes; it is not as simple as that. Causality works both ways here: obesity can cause diabetes, and diabetes can contribute to obesity. More fundamentally, though, scientists say that both obesity and diabetes are diseases of inflammation; they can mostly be avoided by avoiding the lifestyle patterns of inflammation.

This is true too with physical inactivity. Inflammation makes moving around hurt more, especially in the joints, and this can deter physical activity. But if you can get yourself started, physical activity can help reduce and eventually overcome inflammation. Physical activity may burn off some of the excess body fat — that’s what the fitness experts are always emphasizing — but the more important effect is the way exercise reduces the pattern of inflammation that causes obesity.

The CDC suggests that physical activity may also prevent diabetes. Physical inactivity is not really the cause of diabetes, but there are enough stories to suggest that people who have diabetes can hope to cure themselves by maintaining normal body fat levels and activity levels.

Obesity is lower in areas of higher elevation, and here, it appears that is not the elevation itself that protects against obesity, but the hills. Walking up and down hills is somehow a strong deterrent to obesity. This may be just because it builds strength in the leg muscles, which are the largest muscle groups in the body. I have speculated that skiing may be a factor in preventing obesity. Downhill skiing, of course, also depends on the presence of hills and builds impressive leg and core muscles. Of course, you can develop muscles anywhere with the right exercises; you don’t have to look around for hills if there are none immediately around you.

Looking at these county-level maps is an exercise in epidemiology, a field of science that looks at the connections between health conditions and places. The skeptics who doubt the power of epidemiology to pinpoint health information that matters would do well to look at this set of three maps.