There’s No Pow in PowerPoint

The PowerPoint slide seen below has been floating around the Internet for a year, but got people’s attention when it popped up on the front page of the New York Times this morning. It was used there as an example of how hard it can be to understand the PowerPoint presentations that are used every day in the U.S. military — and many other places, for that matter.

I’m showing the slide again here to make a point. This particular diagram, as it was originally created for the U.S. military, might serve to explain the complexity of the Nato military strategy in Afghanistan — but not if it is seen as part of a PowerPoint presentation. In that context, most people say it looks like spaghetti. It is so bewildering to look at that, to the average reader, it may make just as much sense in the version I show here as it did in its original form — even though I have changed almost all the words on it. 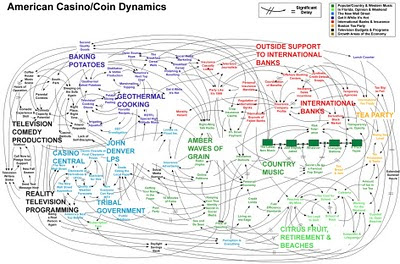 If the diagram seems like it makes some sense in this form (particularly if you click through to the larger version of it so you can read the text) it is because I overlaid the original diagram with a U.S. map, a visual arrangement that you may be familiar with, and used that as a guide in filling in much of the text. But this is only a trick. The parody diagram is no more meaningful than the original. It attempts to show degrees of connections between ideas beyond what is possible to set forth in this kind of medium.

A properly designed slide is limited to about seven featured lines of text. You add more that this at your peril, because a person of average eyesight and attention span cannot necessarily pull together more than seven lines projected on a wall or displayed on a standard-definition video screen. This diagram has 50 lines of text. If you displayed it on a television screen, the small letters would be about 5 pixels tall — too small to read even without the anti-aliasing feature that blurs small type on the screen.

The additional level of information, beyond the 7 lines or so that can reasonably be conveyed, is there not to inform, but to confuse and distract. I studied the original diagram and found that the arrows connecting one point to another were quite arbitrary, at least from an outsider’s perspective. They could have been chosen at random, for all I know, and that also means that the diagram would be just as meaningful without them. The selection of points for inclusion was also arbitrary. I would argue, for example, that road building is the one key strategy that could lead to success in Afghanistan, and in fact, it is a significant part of the Nato plan, but the diagram did not include it. There is no point of accountability in presenting information this way, because no one seeing it can understand what is being said clearly enough to challenge or question any particular point.

But if putting too much detail on a slide is a strategy to confuse and mislead people, using slides correctly is not much better. If you are limited to showing about seven lines of text, all you can show is dimensionless information, a rigid hierarchy, or a simple progression (including what is called a storyboard). Very little useful information actually fits into one of these formats. Worse, the slide asserts the arrangement of information through typography rather than logic. PowerPoint makes it possible to make any assertion of fact subservient to any other, without any requirement for rhyme or reason. There is no accountability in this either.

This is why there is no “pow” in PowerPoint. PowerPoint presentations lack impact because they present information through a lens that filters out most of the meaning. The New York Times story recounts how some of the most successful U.S. military initiatives of the past decade were completed after a commanding officer imposed a ban on PowerPoint. Other initiatives, managed by PowerPoint presentation, have arrived where they are today. There is, I believe, a lesson in that.